During my trip, the day started bright and sunny but eventually it turned gloomy with gustily showers in the afternoon. I paused for a while and took refuge at a gardener’s shade to keep myself dry. The rain was heavy and was not seizing so I initiated a conversation with the gardener who I personally thanked for a job well done. He and his co-workers did an impressive gardening job.

The main road of the ancient city is called Frontinus Street. It connects the Frontinus Gate with the South Roman Gate, splitting the city into two. 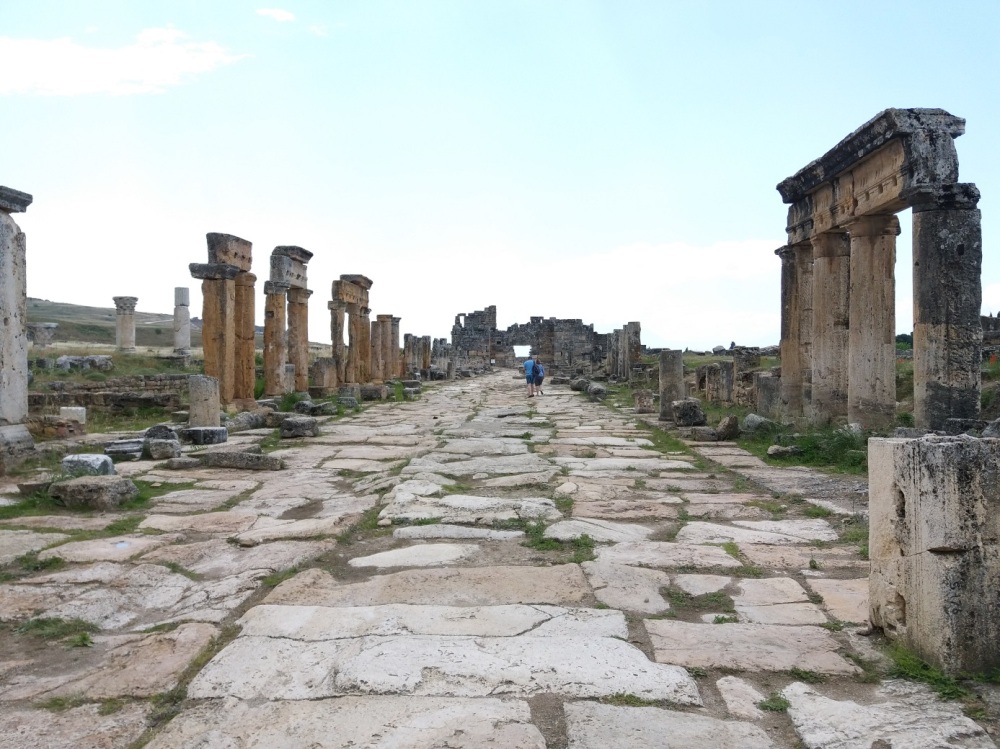 The incredible Frontinus Gate is still standing strong after years of adversities. It has a tree aching passage which is supported by two towers on both sides. This is where the main street and the inner city start. Outside the gate are a public bath and the basilica that used to serve the visitors of the city. Visitors are encouraged to take a bath before entering the city to avoid contamination from outside source. 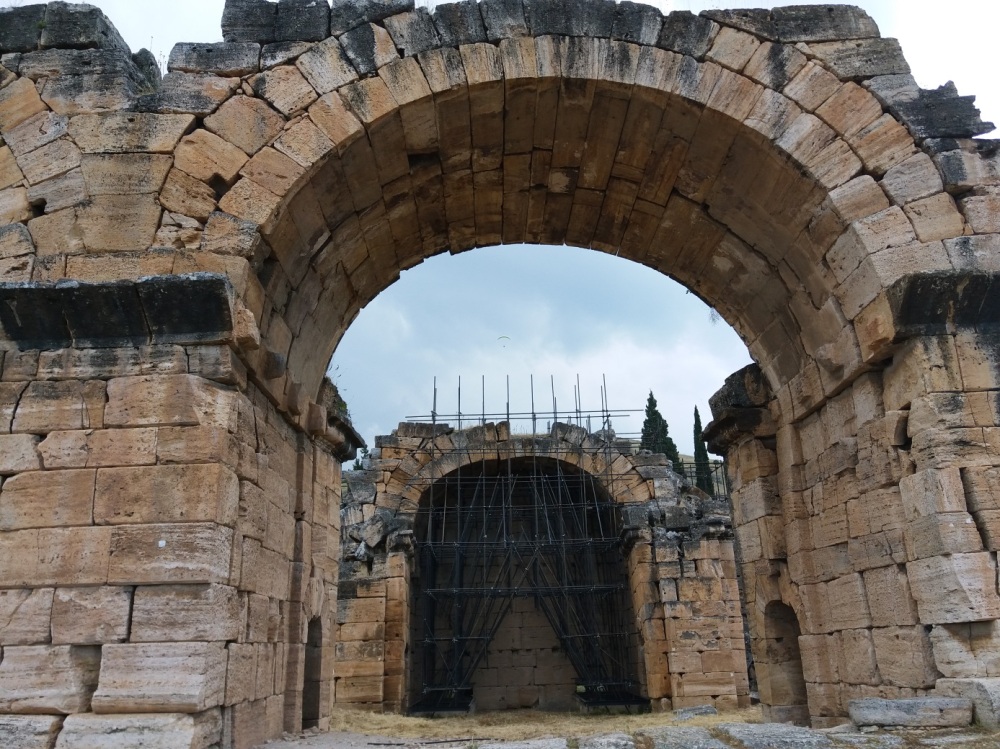 Other than the bath and the basilica, there used to be a suburban theatre and a necropolis in the city. The suburban theatre was totally demolished, however the acropolis was preserved. It covers a large area with a collection of numerous rock-cut tombs and tumulus. 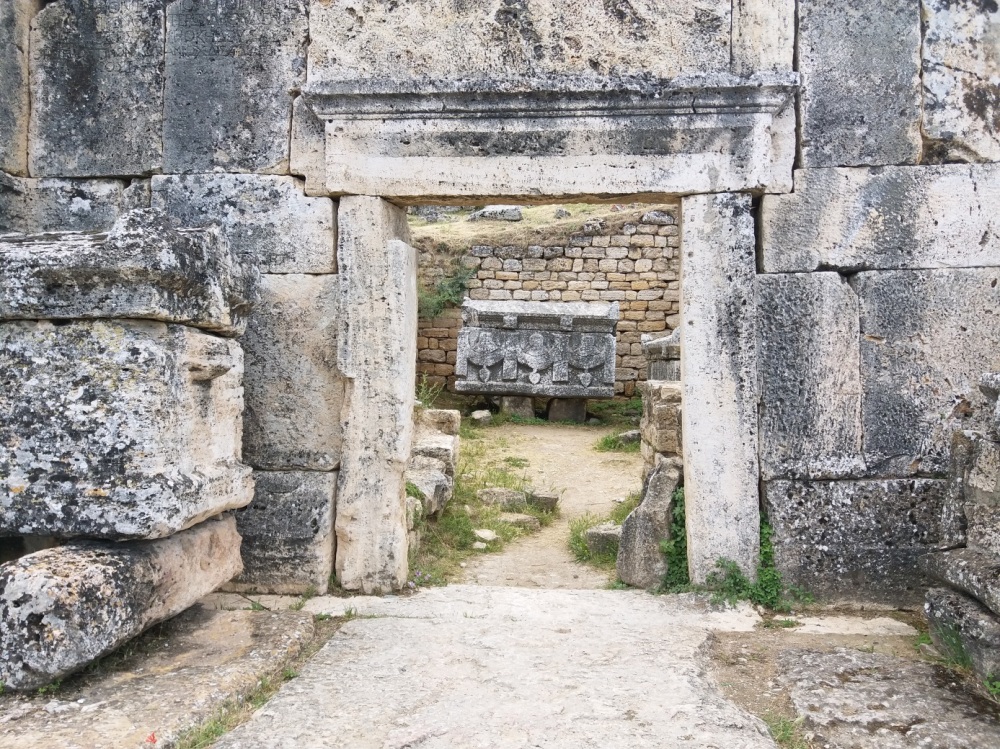 Unfortunately, the largest known structure of the ancient city, the Agora had long since perished. But the bath and the basilica was under renovation when I visited. 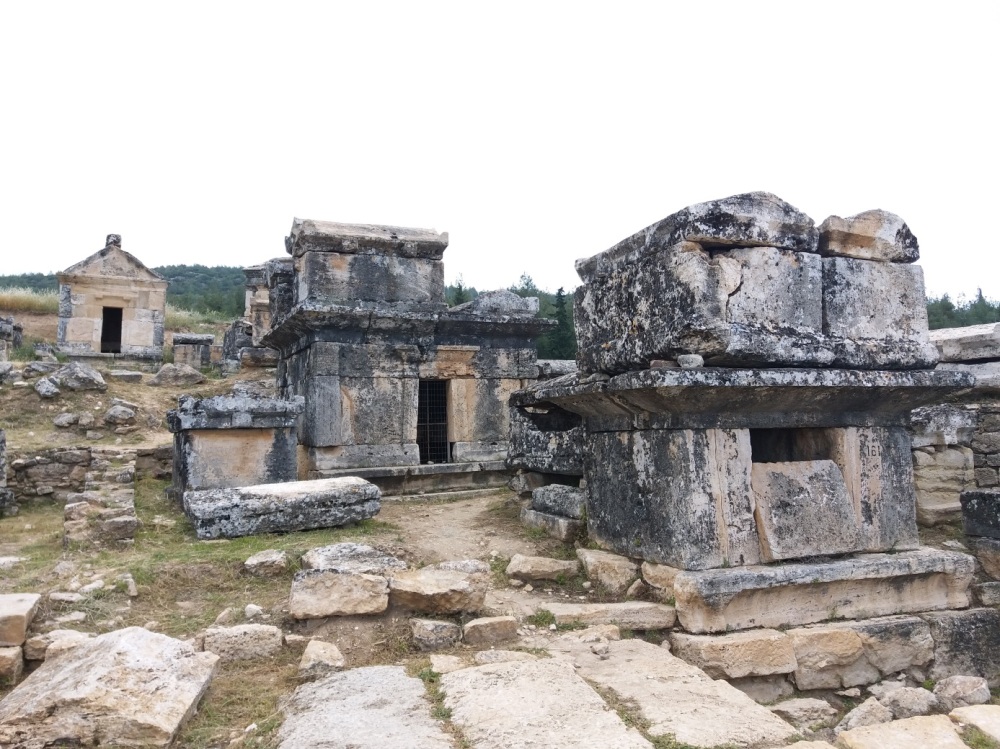 The most remarkable part of the ruins is the Ancient Pool. It is a hot spring water pool and has been around since the early years of the city. It is believed to be naturally formed after an earthquake. It uses the same water source that flows in the travertines and city baths. The 36C degree water temperature is best for swimming even during the coldest winter. Aside from its temperature, submerged ancient columns lying at the bottom contributes to its beauty. 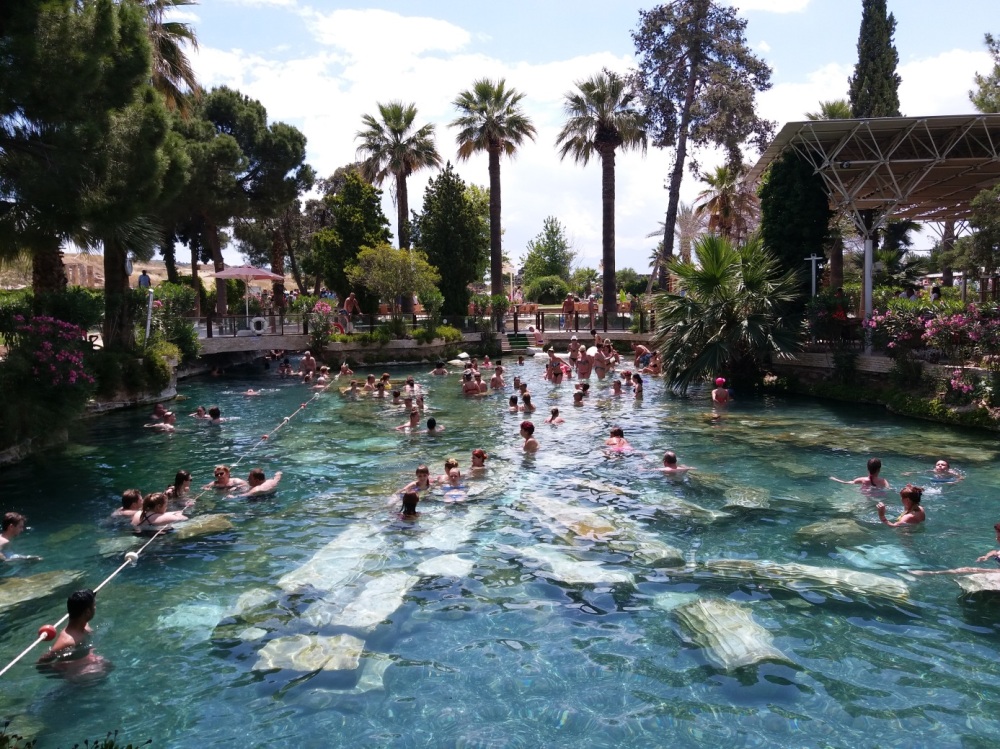 For those who would like to choose not to pay, the warm water circulates in the pool and leaves through water channels underground making its exit to the travertines. 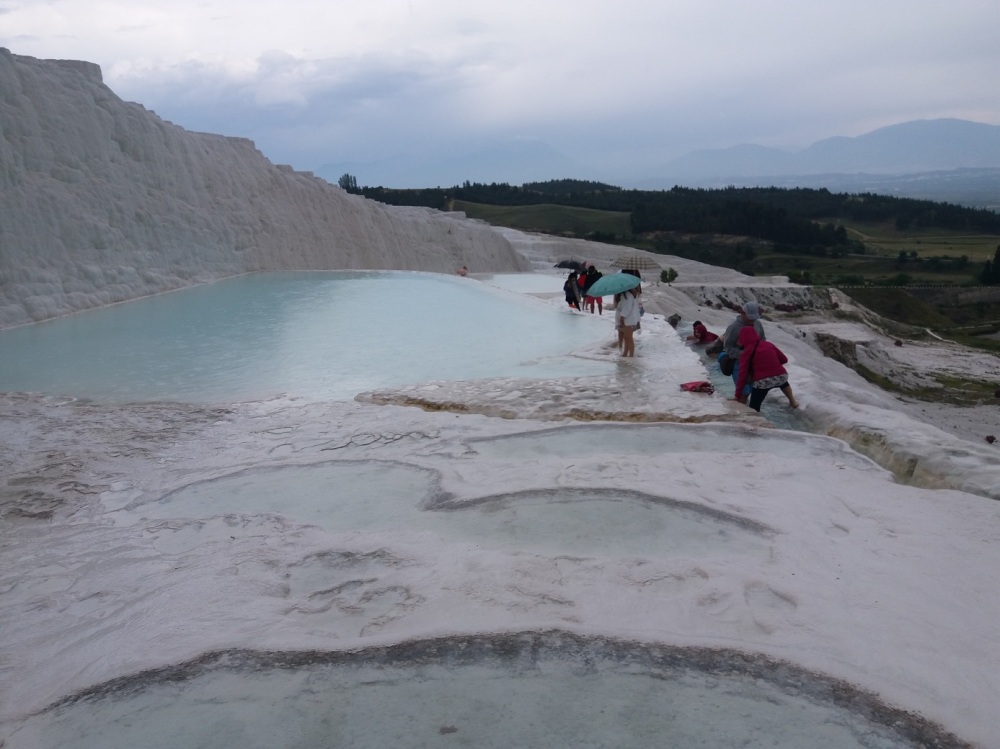 As you enjoy the travertines towards the exit, you can stop by and relax in its basins. Even though the water temperature is not as warm as the water in the pool, it has the same so-called healing effect. Cotton like texture of the travertines create a turquoise color of the water which enhances your pretty perfect pictures.

At the end of travertine silk road, you will reach the west exit of the natural park (Pamukkale). You will need to walk barefoot. Shoes/slippers are not allowed to protect the calcite surface. The surface is not slippery unless it’s covered with algae, however some random areas are, so be careful. 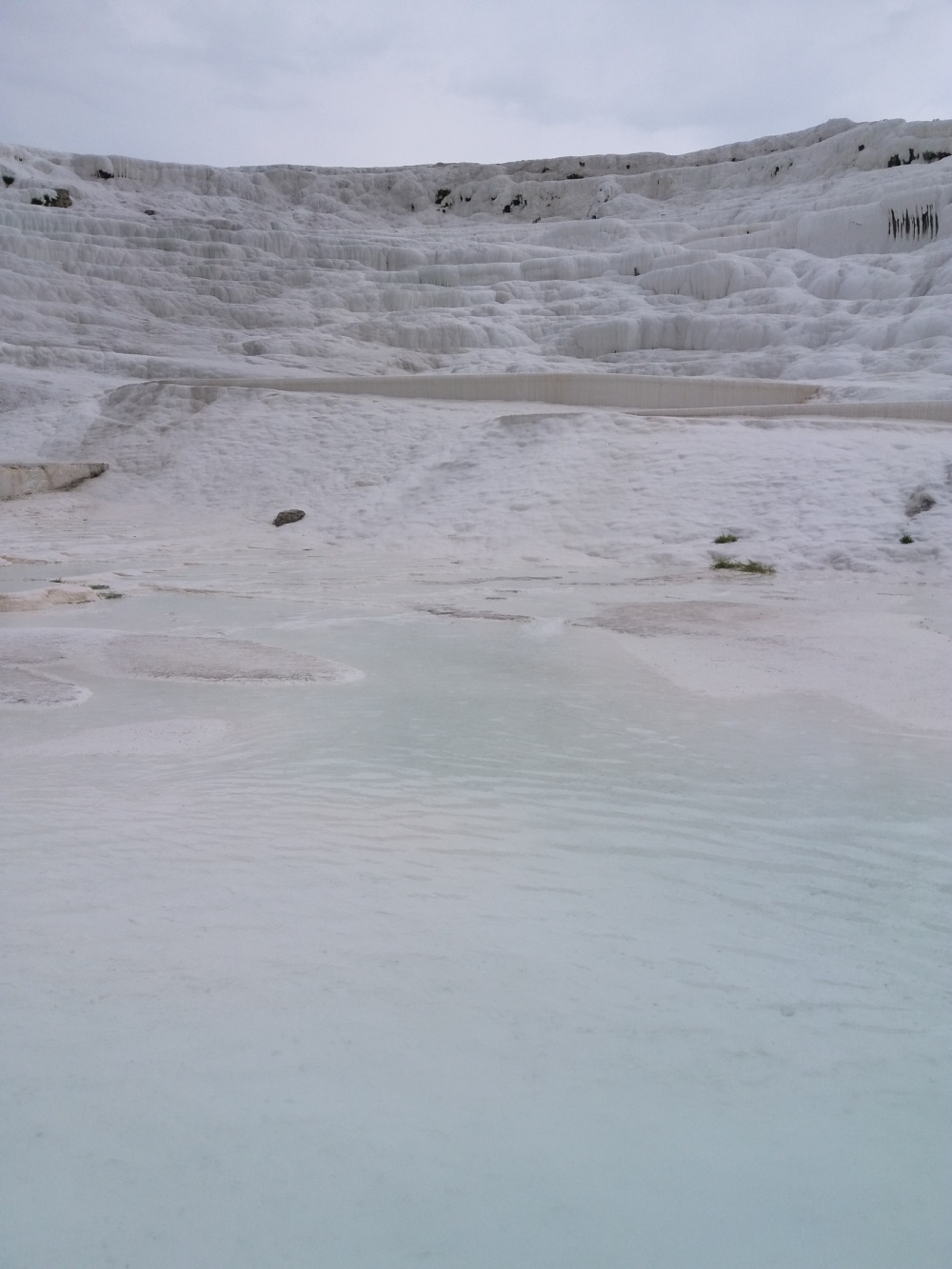 The water flowing down the cliffs is collected by a large pool. Pamukkale is considered to be the main recreational park of the town. There is a small café nearby where you can find Turkish crepe and beverages with extra amazing view since the cafe is directly facing the calcite coated cliffs.

There are acacia plants around the lake with pink blossoming flowers at any season. The lake is also home to geese and ducks. You can also rent a dolphin shaped water bike for recreation. 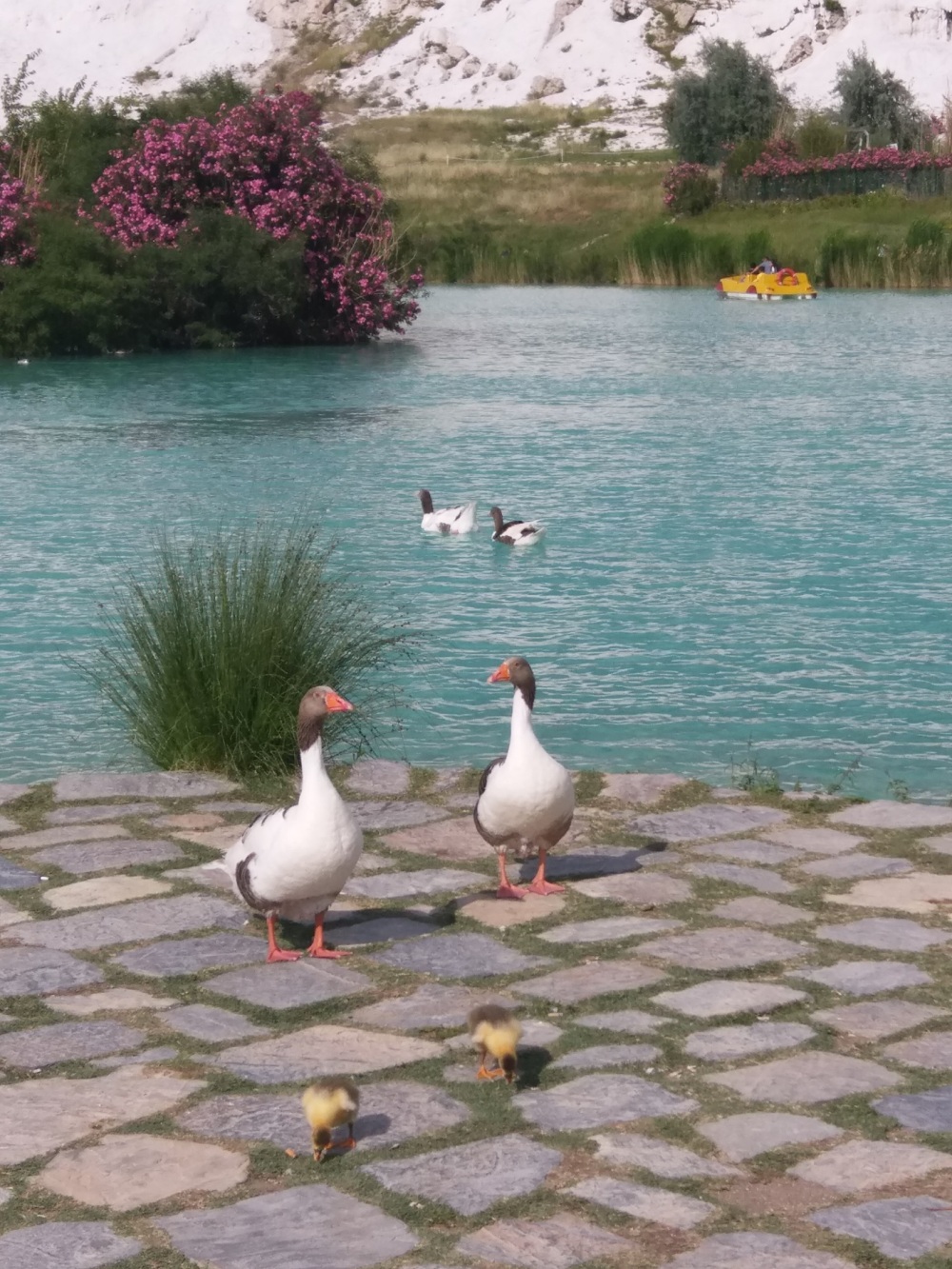 After you finish your Pamukkale visit, if you wish to use the public transport back to the bus terminal or to the airport, you need to call a travel company and book a pick up. There are two competing companies that leave according to departure flight hours.

Before I finish,  I wish to give you a bonus. The Hierapolis archaeological site has a museum; the ruins of the central bath house have been renovated to exhibit archeological findings.

It has a large variety of rock carvings along with coins and other artifacts. Sarcophagus carved from solid rocks, mostly from the wealthy members of the old civilization makes up the important part of their inventory. 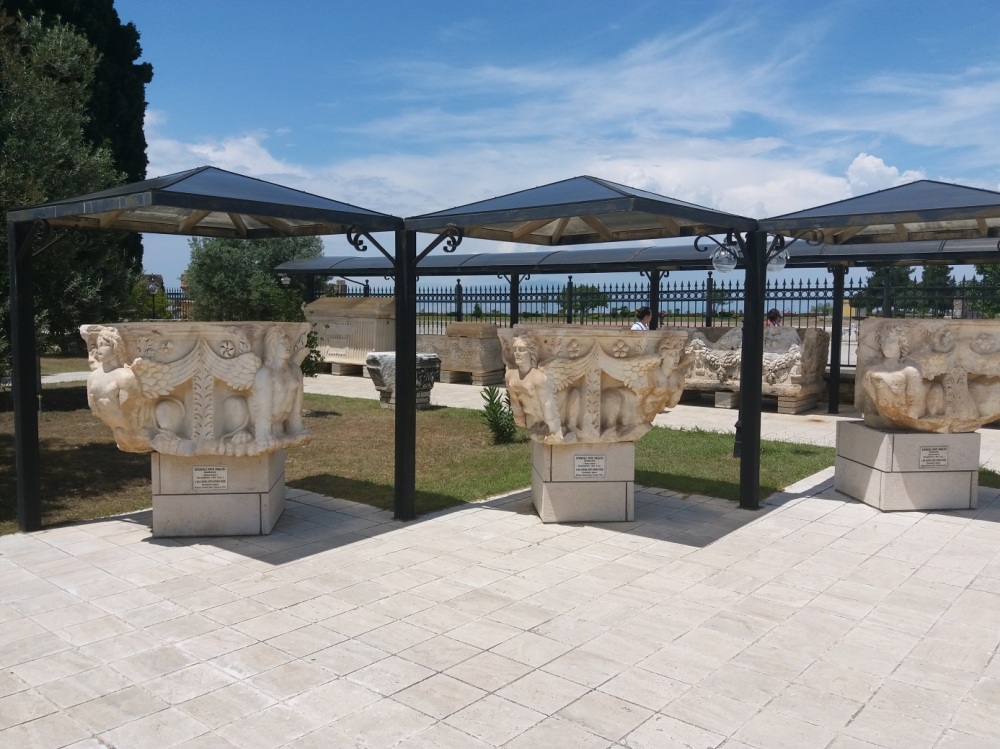 Next to the entrance of the antic pool is a large sculpture of a proud rooster. Denizli is famous for its unique roosters that have the ability to crow for a long time. Roosters from this region can crow for few minutes until they pass out. Folklore songs were written dedicated to this one of a kind creature.