Recently, I have done a small tour in Cappadocia region. The tour took 2 nights and 2 days starting from Istanbul.

Cappadocia region is part of the city of Nevsehir which is around 750km from Istanbul. The most convenient way of travelling is by air. It only takes 1 hour 15 minutes, but since the points of interest are spread around a large area, you will need a car to roam around. If you do not want to bother renting a car and create your own route, you can find a tour package most probably from Istanbul and enjoy their itinerary.

There are many travel agencies that provide such service at a reasonable cost. For instance, I travelled with Jolly Tours and was happy with their service. It was around 65 USD per person inclusive of one-night stay in a 4-star hotel, coach journey return, open buffet dinner and breakfast.

On a Friday night, I took the tour bus packed with tourists and headed for Nevsehir through Ankara. The journey took us almost 9 hours. During the journey, we stopped several times for toilet and other needs.

When I woke up, it was a cloudy morning. Our tour guide saluted us and started talking about our schedule. He has sufficient knowledge and gave detailed information about the region.

The first stop was the famous Ihrala Valley of Aksaray Province. It is 16km long located in the southern part of ancient Cappadocia, formed by Melendiz Stream out of a volcanic rock. Because of the valley’s plentiful supply of water and hidden locations, it was the first settlement of the early Christians escaping from Roman soldiers. In the Ihlara Valley, there are hundreds of old churches in the volcanic rock caves around 105, 16 are open for visitors viewing.

The entrance to the valley has a turnstile hall with a ticket office next to it. The entrance is not free, but definitely worth the fee. Walking down and up the valley is rather challenging. Hundreds of steps are waiting for you. 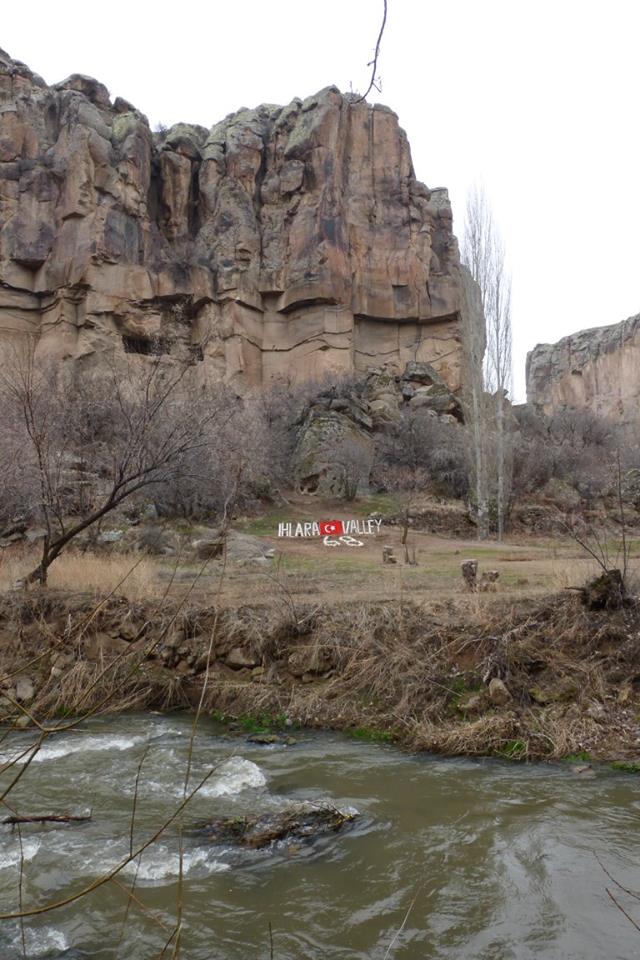 With the guide at the front, we walked down to the valley’s base where the river flows. The first cave church is called “church under the tree”. The entrance has a tree with small leaves. The most striking feature of these churches are the icons (religious free hand wall drawings). All icons are related to Jesus Christ and other religious figures of Christianity such as saints, arc angels, apostles and etc.

The valley is long and it ends at the Guzelyurt Village, 16km away by trekking. We cut the visit short to an hour because of the limited time and headed to a natural beauty nearby, the Narli Crater Lake.

The lake is 21 meters deep that covers only 0.7 km2 in area. The surrounding area has a hot spring which a geothermal hotel nearby is using for weary travellers to relax and have remedial hot spring water dip.

The lake is an important visit due to its appalling view. We stopped for 20 mins. photo shoot and then continued to the region’s most interesting tourist destination, the underground cities.

In the Cappadocia region, there are around 200 underground cities built and used as shelter against occupying forces throughout the centuries. One of the largest of these is in Derinkuyu (means deep well in Turkish) located 30km from Nevsehir center. It is thought to be around 12 floors going deep underground. But today, only 10 of these are cleared and open for visitors.

Due to the geological specifications of the region, building such structures were comparatively easy. Tuff (old volcanic rock formation) can be carved by basic hand tools and if you are patient enough you can dig such depths too.

It is also believed that underground cities of the region are linked to each other via underground passages. However, the connecting tunnels are not fully discovered yet.

To make the underground city more secure, the locals added security precautions. In the photo above, you can see a large rock wheel which is one of the precautions they used. (can be found frequently while wandering in the city tunnels) This device works like a large heavy door to shut hostile intruders out. It can only be moved from the inside.

After an hour of discovering a few floors of the city, it was time for lunch. We were taken to a local restaurant. Before lunch, we were given 10 minutes to take pictures of the Goreme valley from a viewing point.

The lunch was tasty. Food served with side dishes called Mese in Turkish which plays an important role in culinary culture. As soon as we had our lunch, we headed for Pasabag Valley, home of the best pieces of mushroom shaped chimneys. 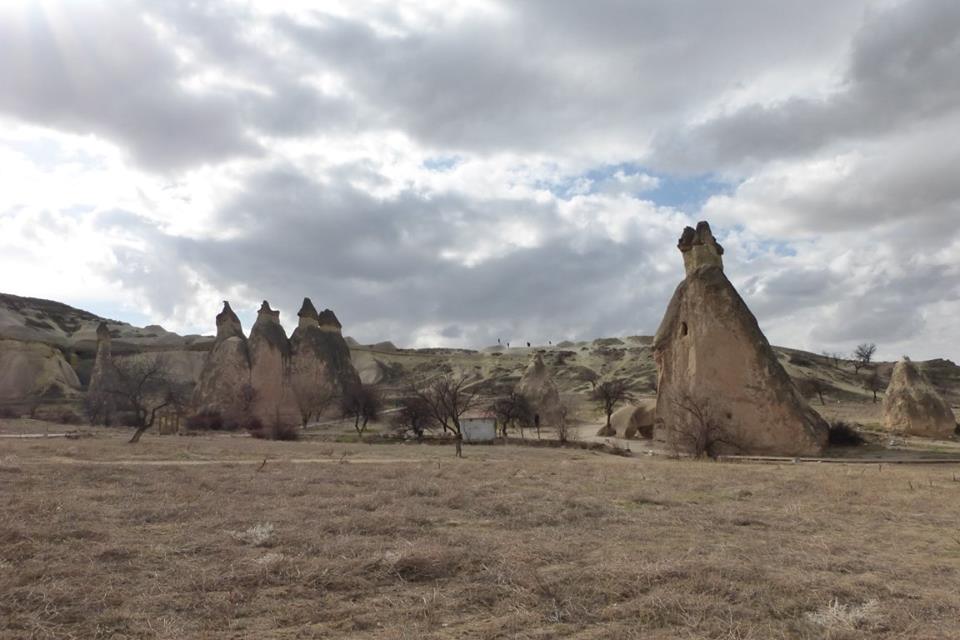 In this valley, you can view both old and young chimneys in the same frame. As explained earlier, these shapes are formed purely by nature. The photo below has an old chimney which has a hat about to be fall in 30-40 years. Losing the hat means death since it will lose its capability to resist strong winds and heavy rains.

Some of these chimneys were carved to be used as houses and churches. Usually, the entrance of these carved places is not visible due to the intention of keeping the place hidden and secure from uninvited visitors.

We were given a good one hour to stray and check around the carved beauty.The next stop was shorter, Goreme. A smaller valley with the same chimney spikes, however, some spikes here resemble to various animals. For example, (look at the photo below) if you have a strong imagination, you will see a camel. 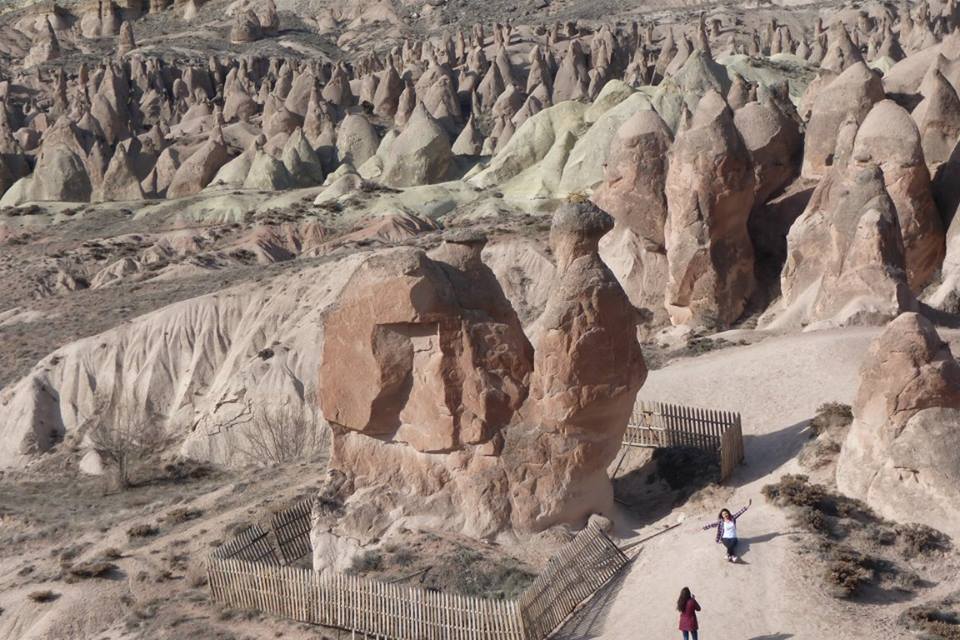 After a short break, the next stop was the famous wine cellars of Goreme. For hundreds of years the region has been known for its wines. The volcanic soil of the land makes it the best place for grape cultivation. Since early Christianity, there has been grape cultivation and wine making in Cappadocia. One of the oldest producers of the area is Turasan.

Ortahisar is a small town but it offers the best traditional stone and cave houses. Towns people living in Ortahisar still use old construction techniques, like having underground chambers as natural refrigerators. Old and new houses in this region must have a carved cave room as an extension. Today, most of the houses around the castle were renovated as restaurants and boutique hotels to serve its swarming visitors.

The tour took us to the distillery. There was wine tasting after a short informative session from the general manager of the winery. They mostly use local grape types and Anatolian vine grape variety. The cost of a bottle of wine is reasonable and the quality is good enough to compete with its French rivals.

After the last stop, we ended the first day. The bus took us to our hotels wherein we had dinner and enjoyed the rest of the day freely. The hotel was built with sandstone blocks which is traditional in the region. It gives exotic atmosphere to its guests.
After an open buffet dinner, we had a long walk to help with digestion. I was curious enough to discover the town of  Ortahisar on foot.

Ortahisar is one of the three ancient fortresses used by Romans (even earlier than Hittites) to protect the region.  These three fortresses are known as Baskale (means Main Castle), Ortahisar (means Middle Castle) and Uchisar (means Third Castle). Settlements around them are also named after the fortresses. Ortahisar is called the largest chimney of the region and has been the center of attention. Recently, the castle has been renovated and reopened for public visit.

Final note about the town, if you feel tired and want to experience the town life like the locals, you should check “Istanbul Bozacisi”. Especially in the cold season, they have the best heating old school stoves.