It was summer in Siem Reap, Cambodia. The weather was dry and hot. Farmlands are on the verge of dying, ponds are waterless and forest trees turned brown. I was taken aback because it was a new experience for me. I have never been to a place as lifeless as Siem Reap at that time. I even hoped for a rain while I was on my way to Angkor Wat. However, when the ruins of the once powerful kingdom of Khmer were in front of me, I forgot how the scorching heat of the sun feels on my skin. How the drought was draining almost every living thing that was struggling to survive. The magnificence of the site revived my spirits. Imagining how the ruins were once a proud empire during its peak was more than enough reason for me to be grateful that I have the opportunity to see the remains of an ancient empire.

From Kuala Lumpur, I landed in Siem Reap International Airport before lunch time. The hotel where I stayed had a free airport to hotel pick-up service which was convenient. I checked-in at noon and purchased a 3-day tour package from them. For $55, it included 20 bottles of iced cold water per day, a tuk-tuk, and a driver. (I could get a cheaper tour if I didn’t purchase it from the hotel but, I was thinking about convinience especially that I was traveling alone.

My driver took me straight to the ticketing office to purchase an Angkor Pass which was located at the entrance road to Angkor Wat. The Angkor Pass is needed before you can visit the temple sites.

We went straight to the ruins after I purchased my pass. There were more than 10 temple ruins on my tour package list. My driver decided to take me to the lesser known temples before going to the highlights. 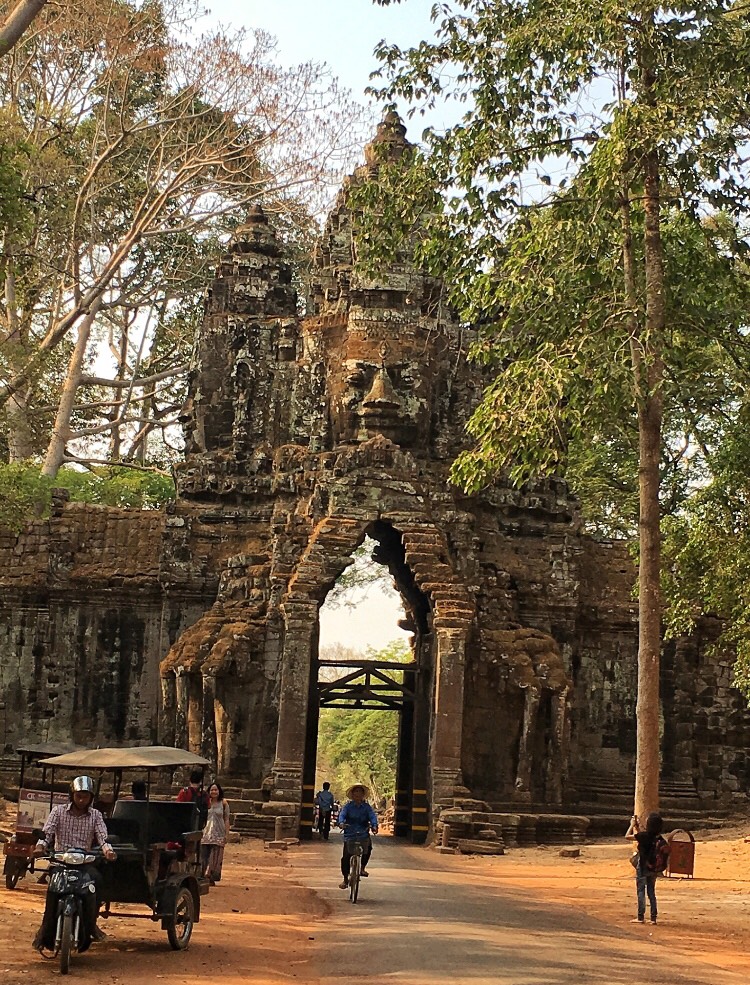 1. Angkor Thom or Great City ( South Entrance) – the final capital city of the Khmer Empire prior it’s abandonment in 1609. The gate was once an entrance to massive building structures. At present, these remains helped archeologists understand the construction of the old composition of the once great city. 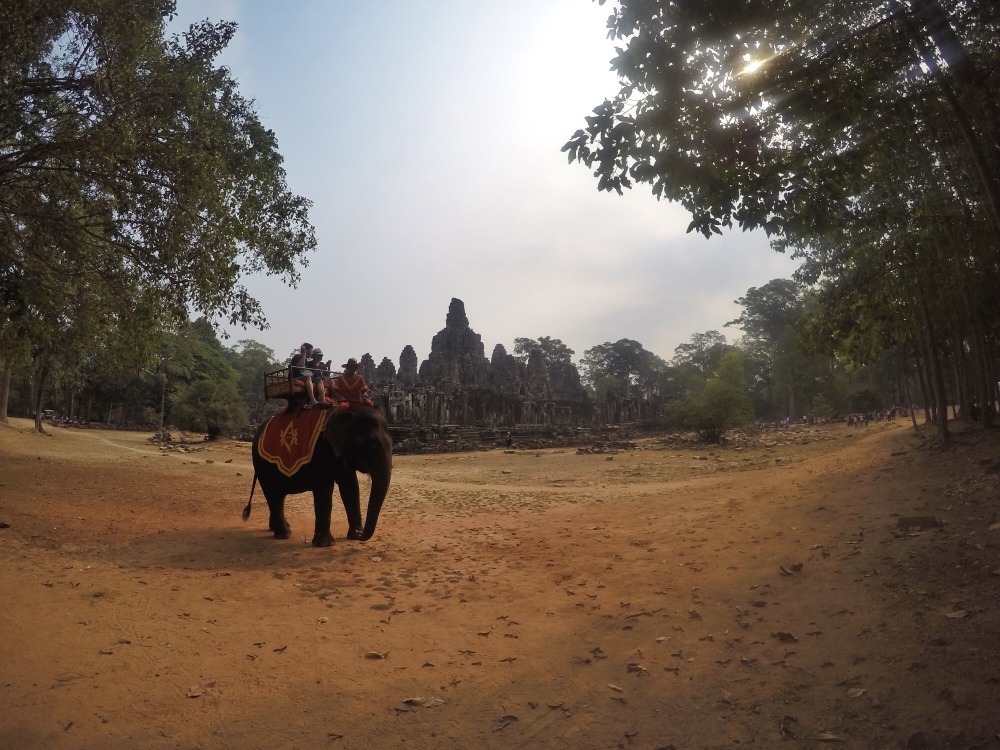 2. Preah Palilay Temple – a temple ruin located in the glorious Angkor Thom. Because of the lack of historical evidences, it’s difficult to date the temple’s construction. With the presence and traces of both Hindu and Buddhist elements, archeologists thought that these were two different structures built on 2 different periods. 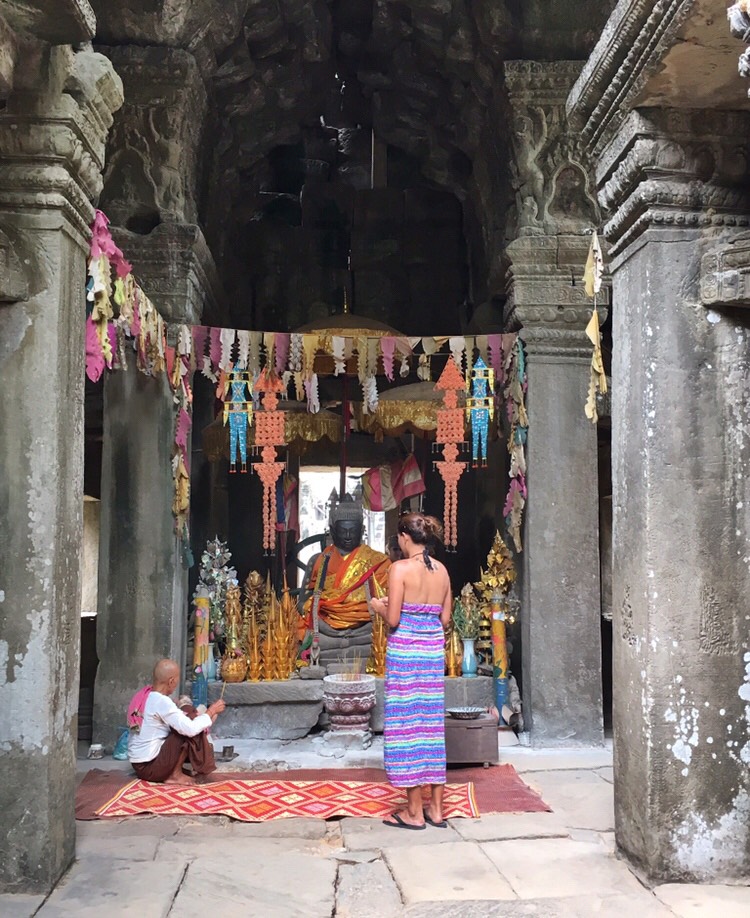 3. Thommanon Temple – a UNESCO World Heritage site. The temple was originally built to worshipped Shiva and Vishnu. The precise dating of the site has a discrepancy as scholars have misunderstandings about when it was constructed; most believed that it was erected during the reign of King Suryavarman II. A full restoration was funded by French archeologists to preserve the site. 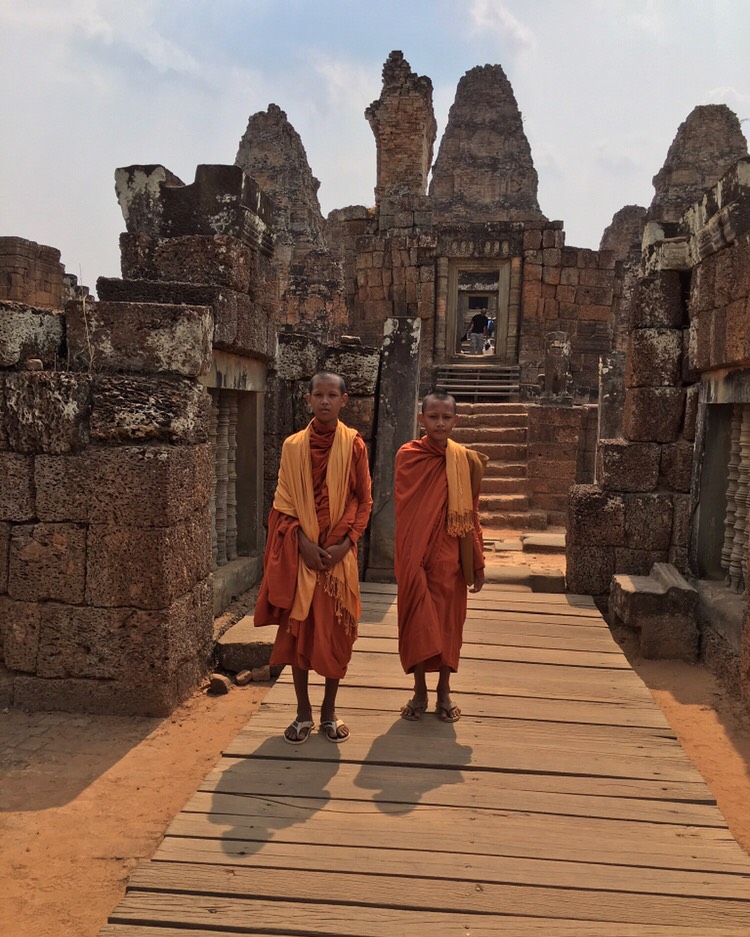 4. Preah Phithu Temples – a group of five temples located in Angkor Thom. They are identified as Temple T, Temple U, Temple W and Temple X. Apart from Temple X, all of the other temples that comprised Preah Phithu are Hindu temples. 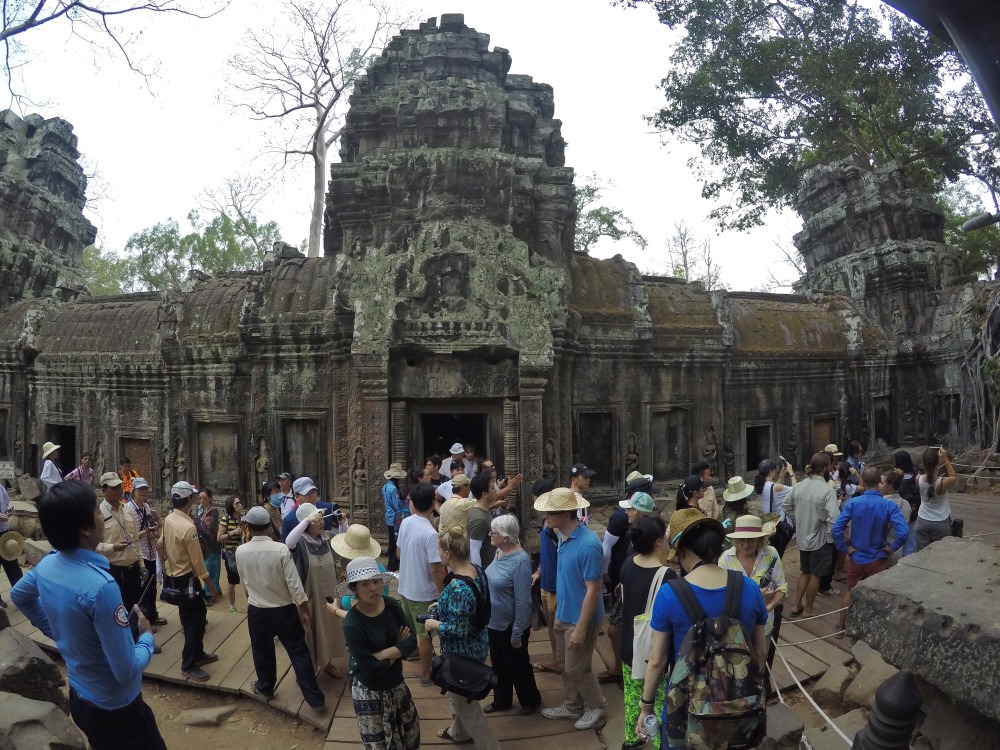 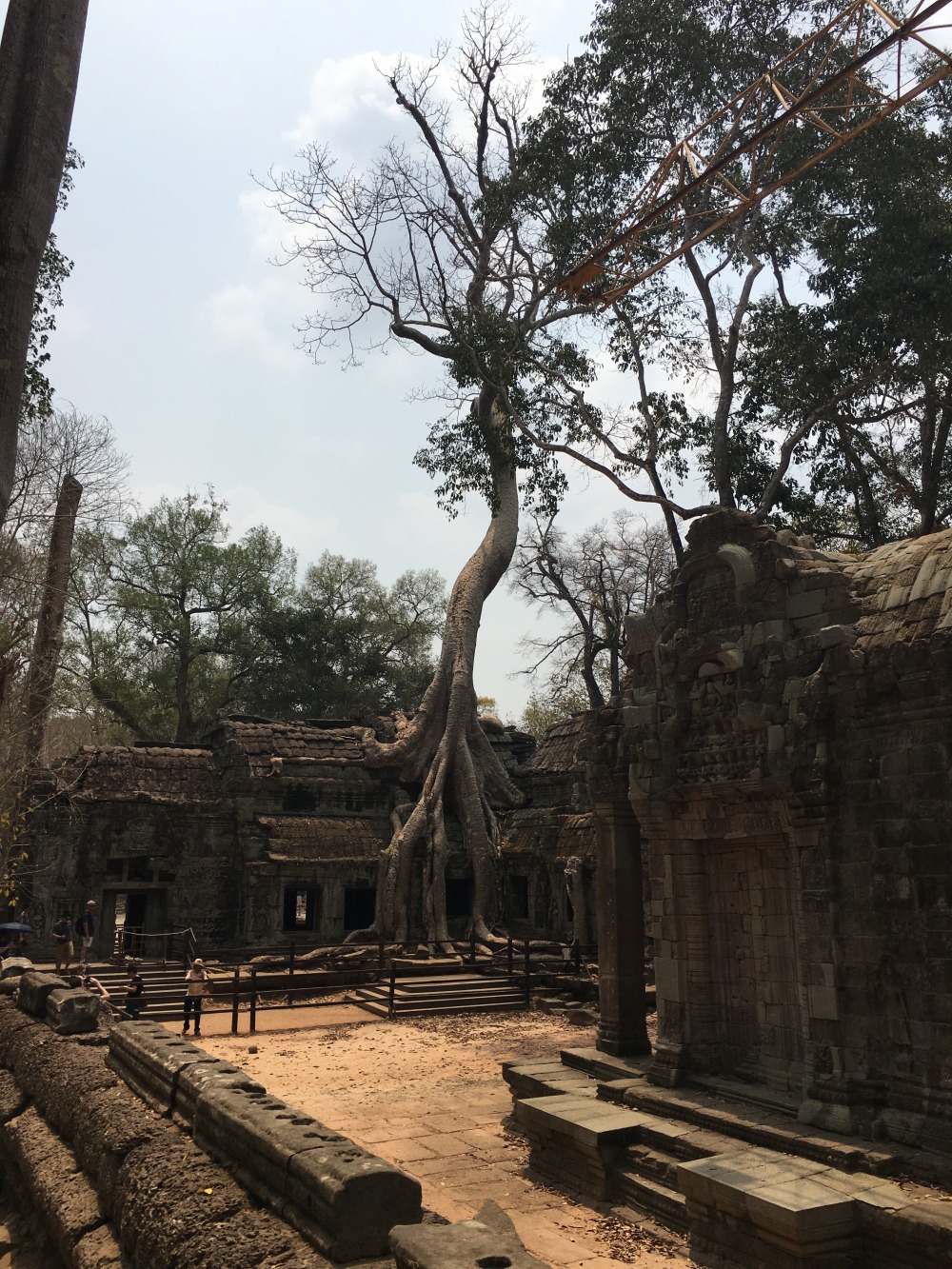 5. Ta Phrom – a UNESCO World Heritage site built in late 12th and early 13th centuries. A popular temple which was made famous by Angelina Jolie’s Tomb Raider. Aside from that, impressive overgrown trees surrounding the site makes it very picturesque. 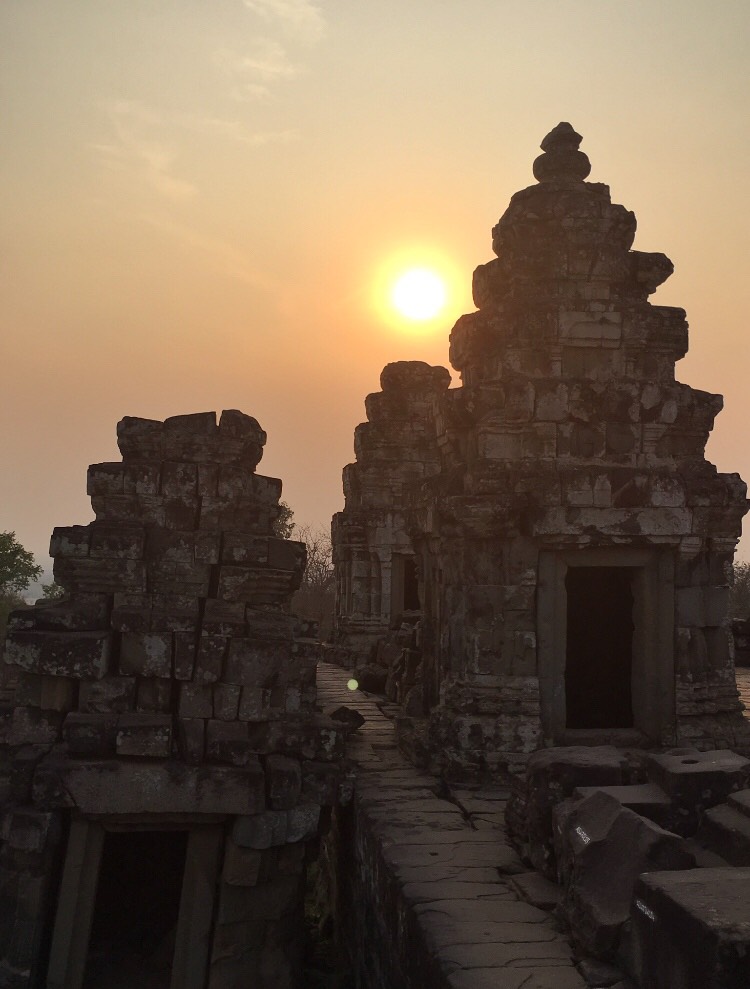 6. I decided to end my day in Phnom Bakheng one of the famous locations to view the sunset in Siem Reap. A heads up to everyone who wants to experience the sunset here, the temple can be cramped with tourists. Since its structure is ancient and it is under renovation, a crowd control team will monitor the number of tourists allowed to witness the sunset. So you need to be at the site before everyone else. Dressing appropriately or bringing of sarong is advised since temple monks have active prayer rituals in the temple.

At 8:00 in the morning after breakfast, my driver was waiting for me outside the hotel. It was another typical summer day. Since I have purchased my ticket the day prior, we went straight to the ruins.

7. Bayon Temple – built in around the 12th and 13th century as a Buddhist temple. After the death of King Jayavarman, succeeding kings modified the temple to their own preferences. Bayon has one of the most striking features in Angkor Wat; stone towers bearing smiling faces are to be found in most sections of the temple.

8. Baphoun Temple – another impressive sight in Angkor Wat. Originally built for the Hindu god Shiva, but later converted to a Buddhist Temple. A huge statue of the reclining Buddha was once housed in Baphoun, however, since the temple was built in a landfill, the stability of the whole edifice was a challenge which believed to be the reason for the Buddha to be removed from its location. A large portion of it unfortunately, didn’t survive and that most parts of it collapsed even before the 20th century. After 51 years of restoration attempts, in April of 2015, archeologists were able to complete it efforts of renovating the site.

8. Phimeanaks Temple – a three-tier Pyramid Hindu Temple built in the 10th century by King Rajendravarman. A watch tower is located on top of the pyramid. As legend says, the king takes the first watch every night with a powerful deity. If the deity won’t show up for a night, it would mean that the king’s days would be numbered. If the king won’t show up, disaster would strike his land.

9. Royal Palace – built by King Jayavarman in the city of Angkor Thom, the new capital of the Khmer empire after the old palace was destroyed by a Muslim ethnic group. Based on the archaeological facts, the palace grounds were built in sections using perishable materials, however, because of geological changes the exact location of Royal Palace is unknown.

10. Terrace of the Leaper King – a Bayon styled terrace located in Angkor Thom which bares 15th century sculptures depicting a Hindu god of Death, Yama. It earned its famous name from a statue that resembles a person with leprosy because of discoloration and moss growing in it. There was also a legend of an Angkorain King, Yasovarman 1 who had leprosy and people believed the statue found in the site symbolizes the leper king.

11. Terrace of the Elephants – used as a platform by King Javarman VII to view his victorious returning army. It was also a ground for public ceremonies that hold the King’s grand audience. The ruins now show parts of the platform foundation and a terrace decorated with elephants.

Since most of the ruins looked similar, I skipped some temples. There were so many locations to visit but, the heat was extremely unbearable.

I asked my tuk-tuk driver to take me to the souvenir shops instead where I bought souvenirs. 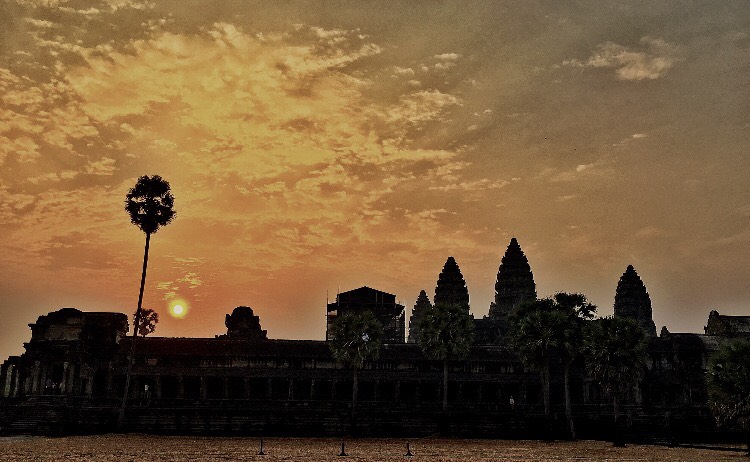 12. Angkor Wat – built in the 12th century  by  King  Suryavarman II, dedicated to the Hindu god Vishnu. It is the best known preserved architectural masterpiece in Siem Reap.

It was 5:30AM and I was on my way to Angkor Wat to witness the sunrise. When I arrived, the temple grounds were packed with curios tourists and monks. At the entrance of the temple, tuk-tuks were parked randomly and the place was totally crowded. (Make sure to have a contact number of your driver to locate him after the sunrise tour.)

Siem Reap is one of the countries in Southeast Asia that has cheap accommodation. I booked at the Overflow Guesthouse for 14$ per night. I got a deluxe double room with cable TV and room service. It includes free pick up from the hotel, bike and breakfast. They have a swimming pool, laundry service, English-speaking front desk, meals and tours available for their customer’s convenience. From the airport, it is a less than 10-min. tuktuk drive. 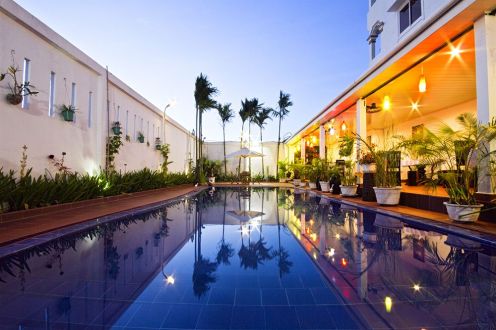 Aside from having breakfast in the hotel, I enjoyed Khmer’s local food. It tastes almost the same as Thai food, but local Cambodian food has a distinct flavor that differentiates it from other Asian cuisine. A combination of meat, vegetables and rice is just perfect for Asian palates. I am not an expert food critic, so I can’t specify how it taste but definitely I like it better than some Filipino food. Convenience stores and Burger King are also available in the city center. 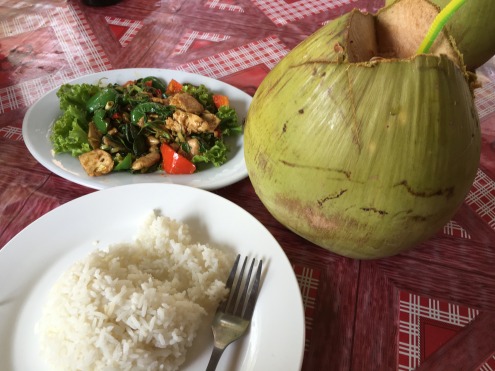 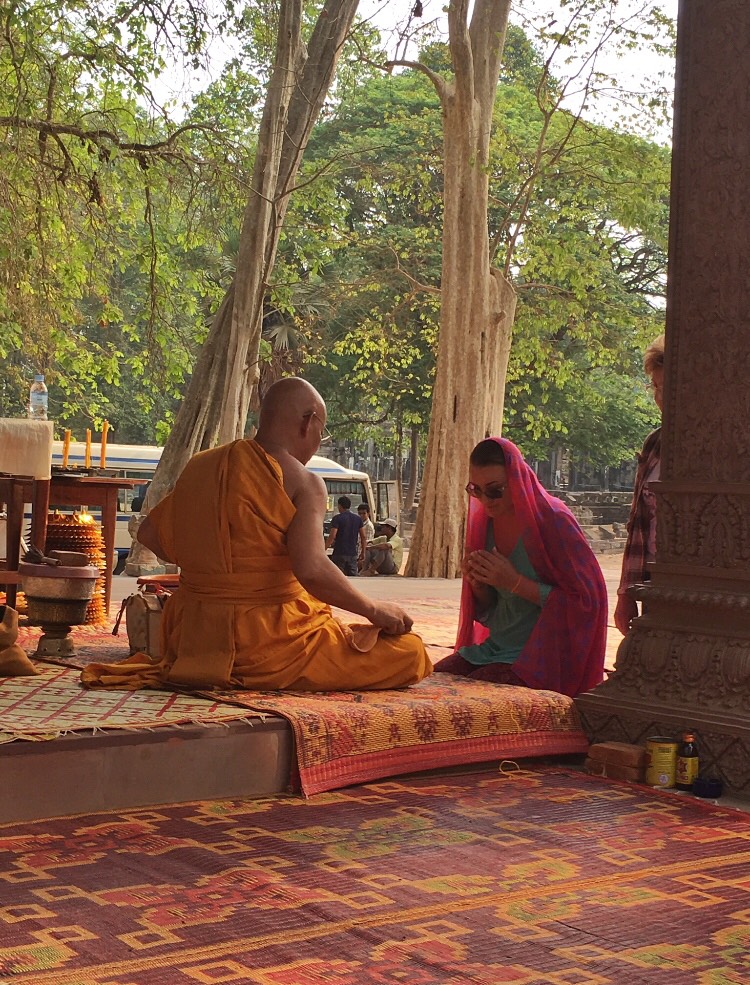 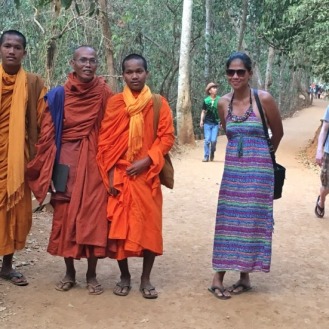 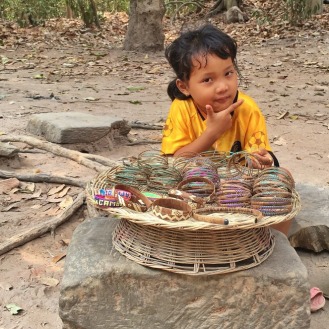 Leave a Reply to My Little Backpack Adventures Cancel reply